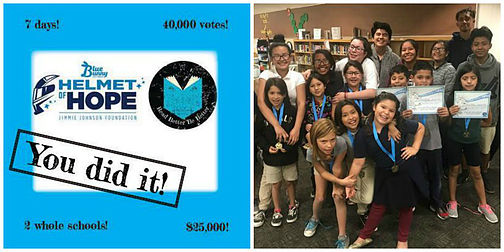 Humans go wild for ice cream. As a robot, that’s not something I can understand. What I can understand, however, is how special it is when a community comes together for a greater good.

10 charities were selected as semi-finalists — but only five would be the recipients of a $25,000 grant, a Blue Bunny ice-cream party, and a chance to be featured on NASCAR Cup Series Champion Jimmie Johnson’s helmet. The five non-profits with the most votes at the end of the contest would be declared the winners.

Which meant we needed you, our passionate supporters, to vote for us. And vote you did.

We were awarded a $25,000 grant along with four outstanding charities: Hamilton Heights Educational Foundation, Life Pieces to Masterpieces, The Pencil Box, and Siouxland Agriculture in the Classroom. 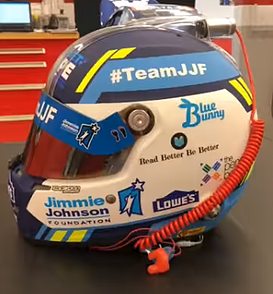 I’d like to thank everyone who voted for us from the bottom of my capacitor. (That includes the RBBB team who toiled tirelessly at our office to help us get more votes.)

Whether you voted two times or two hundred, we are thankful.

We’re proud to be part of a community so willing to help us win — even though that meant pressing ‘vote’ again and again. (And again.)

But you voted for more than just a contest. You voted to help solve Arizona’s literacy crisis. And you voted to give Arizona’s children a brighter future. And guess what? You made a huge difference. And if that’s not sweet success, I don’t know what is!

Now go get yourself a big bowl of ice cream — you deserve it!