Looking Back and Leaping Forward with Alex Peck

Tell us about your role and your background.

“I am currently a Program Coordinator, so I oversee district programming by forming and maintaining relationships with school staff and supporting Program Coaches as they support students.”

Do you remember your first day?

“I vividly remember my orientation day with Sophie! I had decided I just wanted to be a substitute, because I wasn’t sure if I was ready to take over a full site on my own as a Program Coach. After I heard Sophie talk about RBBB, the reason for its existence, and how we are primarily working towards social justice and equity, though, I was in. I really was blown away by the fact that something as simple as helping students with literacy would have such huge societal impacts. And I’ve been hooked ever since.” 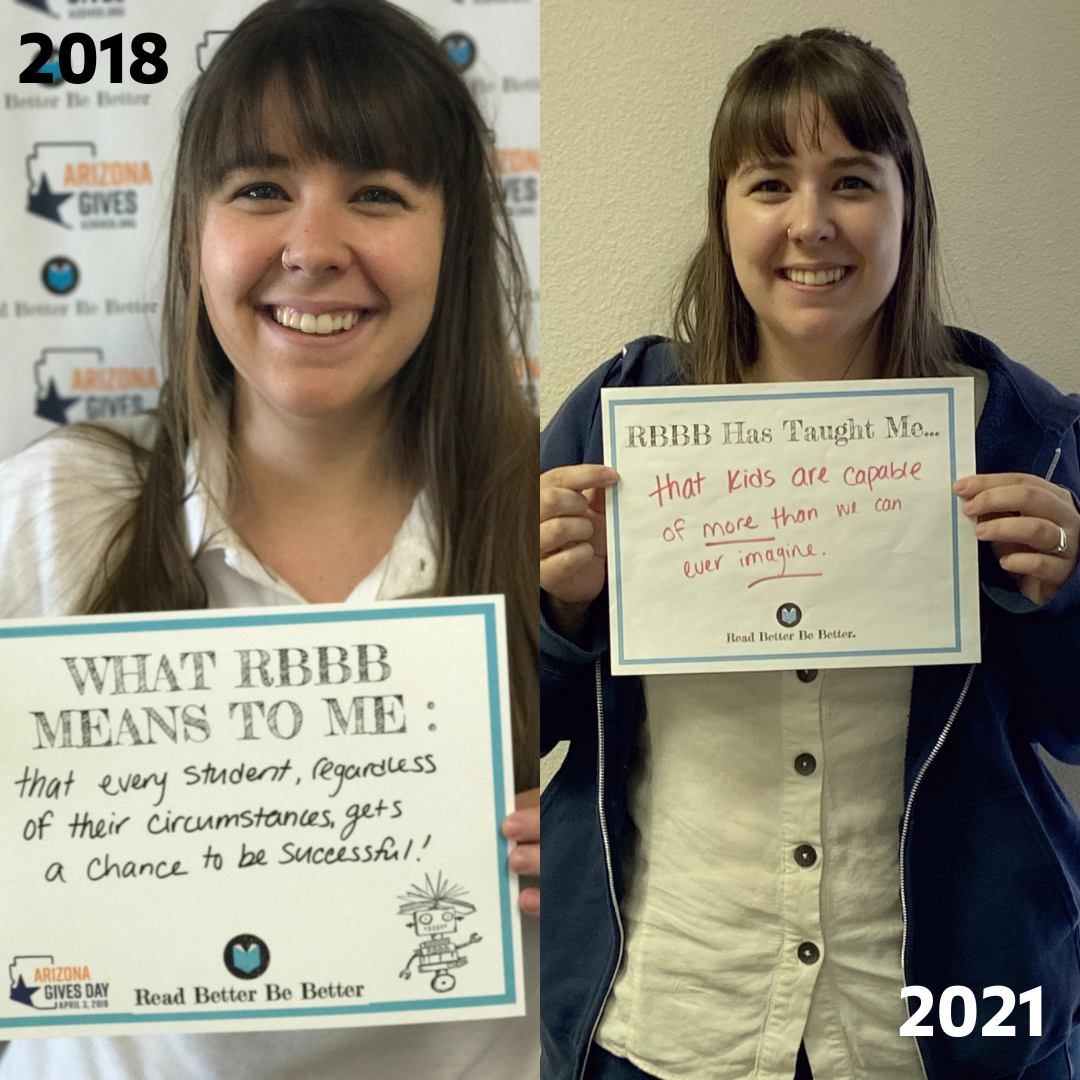 How has your “why” evolved since you began your role?

“Honestly, I don’t think it has changed much since I began, but really it has just become more meaningful. My ‘why’ has always been that students should have the opportunity to be successful, no matter their circumstances. And I’ve just seen that time and time again, semester after semester, when you allow students to see themselves as powerful and capable, there is nothing they can’t do.”

How has RBBB evolved since you began your role?

“HUGELY. I began as a part-time Program Coach running one site, and there were maybe 3 full-time team members. Now we have a 15+ full-time executive team, are in 10 districts, and our reach and programming have expanded to encapsulate so many students, it’s been really amazing to be a part of.”

What achievement, success, or project are you most proud of from the past four years?

“This is so hard to answer, because there has been so much! I’m particularly proud of developing RBBB At Home during the pandemic and being able to provide programming to students while also involving caregivers in their students’ success. During a time when so many caregivers were trying to deal with so much upheaval and stress, I was incredibly proud to be able to provide something that gave them some relief and a time to just connect with their kids over reading. It was simple and straightforward, but it made such a huge impact for the whole household from babies to grandparents!”

If you could go back in time to your first week at RBBB, what would you say to yourself? What advice would you give?

“I would say to just listen. Listen to what students have to say and listen to what team members have to say, because really, the most valuable things I’ve learned came from the people around me, especially the students. I thought I had to go into site and really hold their hands through it all, but when I just let the kids work to solve their own problems, I learn so much from them.”

What is something you have learned in the past four years that you might not have working somewhere else?

“The power of student empowerment! I feel like I can’t state it enough! I came from a social work background which can be very much adults telling children what they need to do to get better and not as much about giving them their own agency—just from my own experience. RBBB, however, is ALL about students being empowered to find solutions and power within themselves and adults just getting out of the way to allow that to happen. There is nothing more satisfying than watching these students grow in their own self-confidence over the 10-week semester—that is something that no one can take away from them because they developed it on their own. And I just get to watch the magic happen.”

What is your greatest hope for your upcoming years at RBBB?

“I just hope that we continue to serve more kids and that the students we have served feel empowered to continue to make an impact in their community. Whether it’s through teaching, advocacy, voting, organizing, running for office, volunteering, whatever. I just hope that what they accomplished in RBBB stays with them and they continue to realize their unlimited potential.”

Thanks for sharing, Alex! We feel so lucky to have had you on the team for 4 years and can’t wait for another 4!