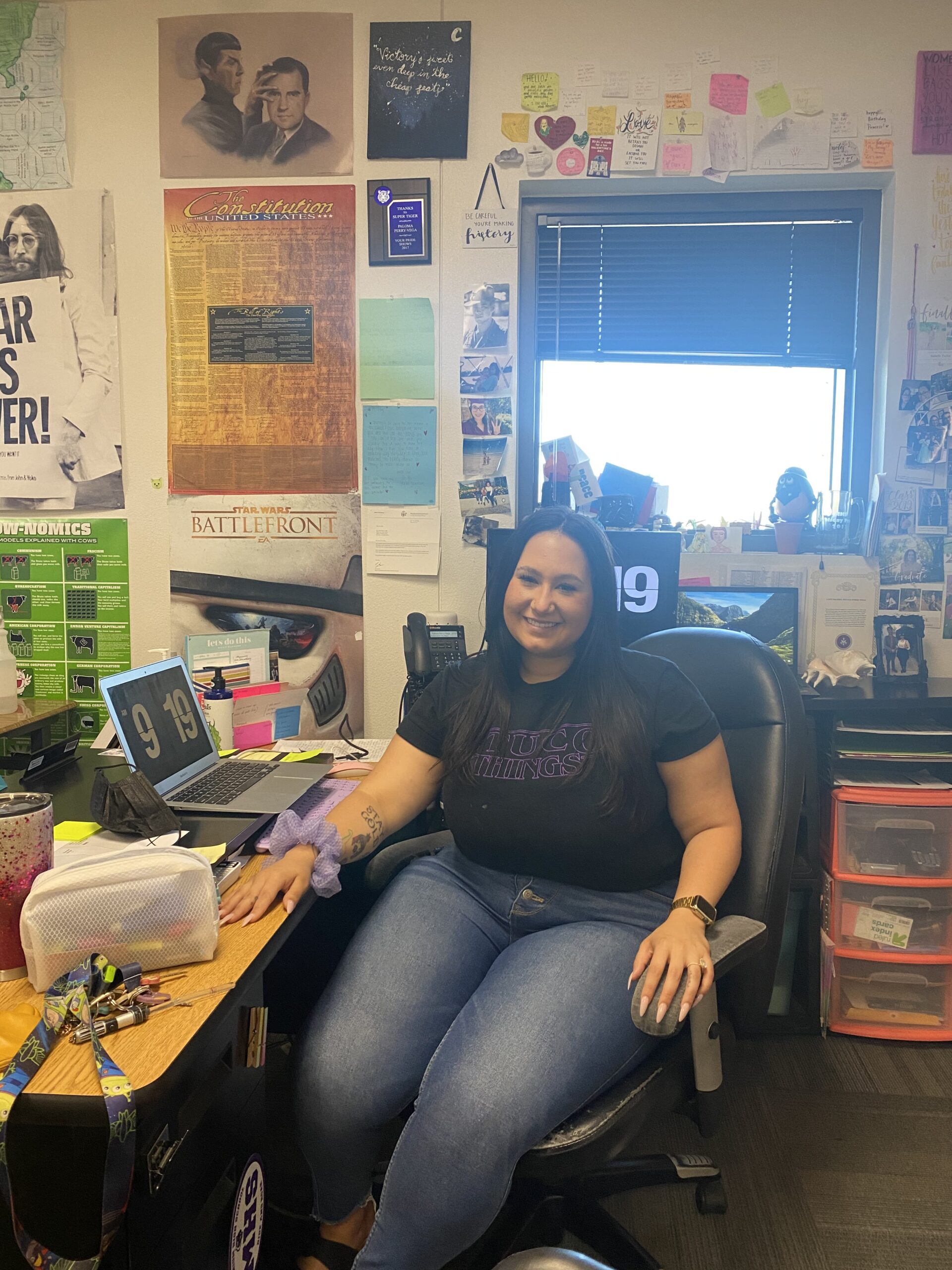 Paloma Perry-Vega in her classroom.

“Look inside the front cover,” the student said.

Perry-Vega opened the book and there, in the stamped box that students sign annually to check out their school textbooks, was Perry-Vega’s name. Perry-Vega had used that very textbook when she was a student at Agua Fria High School 10 years before.

That moment illustrates a movement that is increasing in the state: a grow your own (GYO) teachers approach to education in which former students return to teach in the districts in which they were raised, diversifying the educator workforce, increasing the quality of instruction, and resulting in higher rates of teacher retention.

Perry-Vega went to Western Sky Middle School in Goodyear before attending Agua Fria High School in Avondale. “I had an idyllic high school experience,” she says. “There was so much school spirit and very few cliques.”

And even though Perry-Vega loved school and the teachers she took classes from, she did not major in education as an undergrad at Arizona State University (ASU). Instead, she focused on journalism and political science, with a career goal of working in politics. Her first job experience was in social media for a political party.

“I found that there was not a lot of human interaction and I missed that,” she says. “I was also working a restaurant job at the time. I told my co-worker that I wanted a career that involved talking to people, and one that made a difference.”

Perry-Vega’s co-worker told her, “Teaching makes a difference.” Within a week, Perry-Vega had signed up for the post-baccalaureate educator prep program, the Arizona Teachers Academy (ATA), at Rio Salado College.

The ATA was launched in 2017 by the state’s universities and community college partners to better public education in Arizona through an improved teacher workforce. Undergrads, graduate students, and students who have degrees in other disciplines but are returning to school to become teachers are all eligible for ATA programs.

Northern Arizona University (NAU) offers a dedicated GYO teacher program that recruits, educates, and provides ongoing instructional coaching and professional development for people who are already connected to a school or community, yet may not have previously considered the education field as a career. Additionally, the NAU program offers a means to an education career that minimizes student debt by providing full-tuition scholarships to eligible students. In return, graduates commit to teaching in an Arizona public school for the number of years that they received financial assistance.

While Perry-Vega did not attend the NAU program, she did choose a GYO pipeline to her teaching career. Because of her close connection to Agua Fria High School, Perry-Vega completed both her internship and student teaching at the high school she once attended. She intended to seek a full-time teaching job at Agua Fria once she graduated, but the high school had no openings in her specialty at the time. She was prepared to continue working her restaurant job until a position opened, however, a former teacher of Perry-Vega’s saw her application in the district pool and recommended her for a teaching slot at Millennium High School, which is also in the Agua Fria Union High School District. At her first interview, Perry-Vega was offered the job.

Six years ago, when Perry-Vega began teaching, she was part of a small group of first-year teachers at Millennium who all grew up in the Agua Fria District.

“We were new teachers, but we really weren’t. All in all, as a student and a teacher, I’ve been in the district for 20 years,” she says. “And because we’d been students, we knew the district well. So now, as teachers, we were immediately listened to and taken seriously at our school, more so than other new teachers, because we have a long history with the issues that the school and district are experiencing, as well as knowledge about solutions that have been tried in the past.”

This type of deep relationship to a school community and a district could be a part of the solution to Arizona’s chronic teacher shortage, which the pandemic has brought to new and critical levels. In a December 2020 survey conducted by the Arizona School Personnel Administrators Association, 27% of the teacher vacancies in the state remained unfilled, an increase of 6% from the year before, and nearly half of those hired to fill vacancies were teachers who don’t meet the state certification requirement.

The problem doesn’t stem from a lack of in-state education majors. Hundreds of students graduate each year from the education colleges at the three state universities as well as Grand Canyon University (GCU). Rather, staff retention of those new teachers is the crucial issue.

A 2017 report by ASU’s Morrison Institute for Public Policy found that nearly a quarter of the teachers hired in Arizona between 2013 to 2015 were not teaching in the state just one year later. The shortage is especially serious at Title 1 schools where experienced, certified teachers are needed most. According to data from the Arizona Department of Education, in 2019-2020, more than 20% of core academic teachers, principals, and other school leaders at Title 1 schools had less than 3 years of experience, while more than 10% were teaching out of their field or held emergency credentials.

“This is my home,” says Perry-Vega of teaching at Millennium. “I work with teachers who were my teachers. I’m invested in these kids because I was one of these kids not so long ago.”

Research into GYO programs has found that teacher retention is high. A 2007 study by Kim Fui Lau reported a 10-year 95% classroom retention rate of graduates from a GYO program at Armstrong Atlantic State University that transitioned paraprofessionals to certified teachers. The success was due, in part, to mentoring support, the teachers’ abilities to maneuver through their institutions because of their familiarity with the staff and the systems, as well as the personal connections these educators had with their schools and communities.

It is those familiar connections that Read Better Be Better sees as a pathway for its own students to eventually enter the education profession as adults.

As students, RBBB participants are given a number of relevant education experiences at different stages in their learning careers. First, RBBB invites its elementary school Readers to return as middle school Leaders, allowing them to work with younger students on their reading comprehension and become the student they once looked up to. Then, as high school and college students, former Leaders are provided with the opportunity to be paid Program Coaches who facilitate RBBB’s after-school sessions in the schools they attended. Finally, after graduating from college, RBBB expects many of its former participants to seek work in their old districts, bringing their connection full circle.

And it’s not going to be too long before Perry-Vega will experience a new form of connection in her teaching career. “Fairly soon I’ll be teaching kids whose parents I went to school with!” she says.